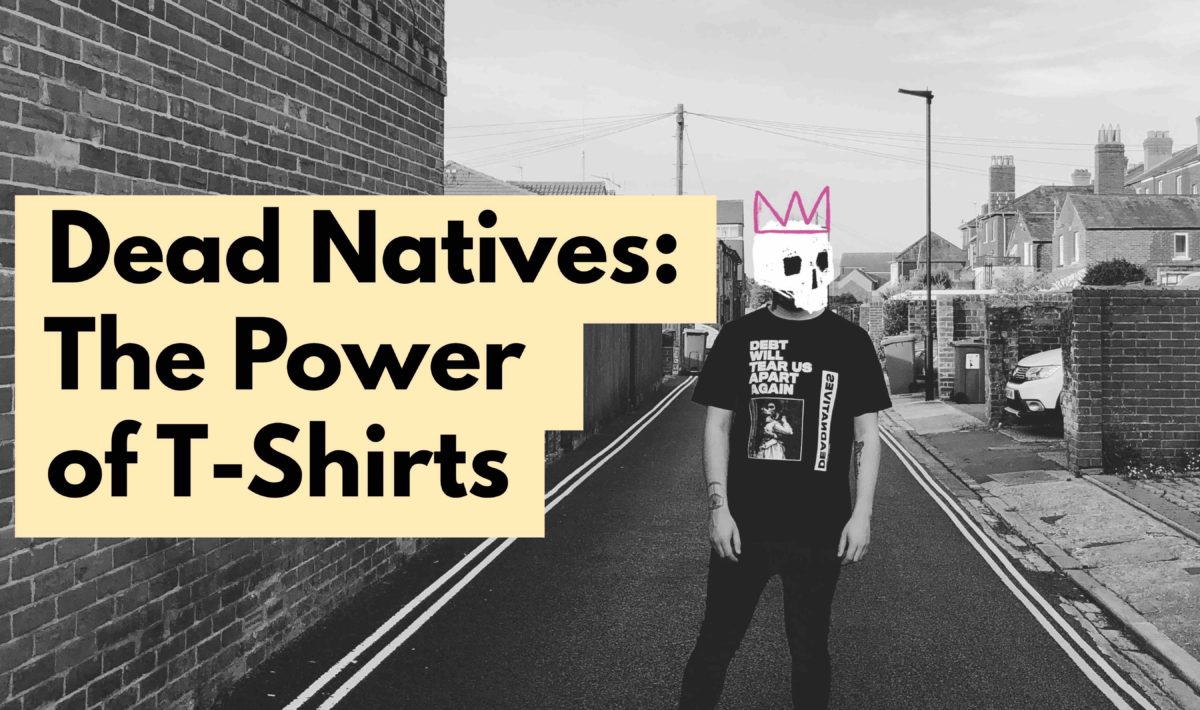 Introducing Dead Natives, the eco clothing start up from the Isle of Wight blending punk spirit with ethical fashion.

At the beginning of May we jumped on Health Secretary Matt Hancock’s new found praise of the Island to create a special t-shirt, raising money for our new platform for young people, Brave Island. To pull it off we collaborated with the mysterious founder of Dead Natives who was kind enough to tell us more about their work.

Dead Natives is a sustainable streetwear startup that’s come to our attention over the last few months. When did you launch and how did it come about?

I often ponder how strange life can be. Coming out of university ten years ago, if you’d said to me that I would launch my own clothing brand I have no doubt my answer would be “there is 1% chance of that ever happening.”

I guess it’s all about the opportunities that turn up and whether you grab them with both hands or let them pass you by. In the years since uni I’ve been given an amazing opportunity to design clothing ranges for some of the biggest brands and organisations in the UK.

Tens of thousands of people worldwide have worn my designs, and they’ve made multi-millions in revenue. I’m confident saying I’m one of the most successful up-and-coming designers in the country that no one’s ever heard of.

After years of graft and honing my craft, I’d been toying with doing my own thing for a while – but I never quite took the plunge… then a couple of things pushed me over the edge.

The first was people’s complete disregard for the mistreatment of the natural world. The second was the frustration of watching my country being torn apart by scumbag, blue-blooded career politicians and the corrupt British media.

I know, two heavy issues – but they’re things that made me feel voiceless and powerless. I knew there must be other people who felt the same, and I decided that would be what my brand would be about.

So, in 2019 I founded Dead Natives to give a voice to those who can’t be heard through the hypocrisy and the shouting – as my new favourite slogan goes, “the slogan t-shirt is mightier than the sword”. (I should probably trademark that or something haha!)

Who designs the clothing? How would you describe the Dead Natives style?

I talked about the success I’ve had in my career since uni earlier – I should mention that success is down to the fact I’ve been part of an amazing team here on the Island. I’m one link in a chain of super-impressive people in manufacturing, programming, marketing and sales, and without their hard work and talent I wouldn’t be in the position I am today.

Collectively, we’ve set out to change the face of the fashion industry by allowing anyone to tap into a sustainable supply chain, and launch their own brand for free using Teemill.

So Dead Natives uses Teemill/Rapanui’s range of organic cotton base garments – to me they’re the best in the world, and I wouldn’t want to associate my brand with anyone else.

This no doubt makes Dead Natives a bit marmite – I like to ebb and flow on the thin line of controversy – but I think this philosophy is the key to being authentic and lets the passion of why I started Dead Natives shine through.

I could have easily created another generic t-shirt brand of cool designs, but that’s not why I work after hours to do this. I need it to mean something, to stand for something more – otherwise what’s the point?

Fashion is notoriously polluting for the planet so it’s great to see your range has impressive sustainable credentials. What does this actually mean and what do you do to minimise your carbon footprint?

When it comes to the climate, we are at a defining moment in the history of the human race. The one silver lining to the COVID pandemic has been seeing the positive effect that all those heavy polluting industries grinding to a stop has had on the natural world.

I just hope governments and big corporations take notice of this. They’ve been handed a second chance to make drastic changes – an opportunity that I don’t think they would’ve had or been conscious enough to grasp if it was business as usual.

Let’s just hope that when the dust settles society doesn’t fall back into bad habits – after all, there is no vaccine for the fallout of a climate disaster.

This is why Dead Natives products are made from natural materials. The whole manufacturing process is powered by renewable energy from start to finish. And the most exciting thing is that once they reach the end of their lifetime, our products can be returned and remade again and again as part of a circular economy.

“…if I can start a sustainable clothing brand from my one-bedroom flat in Newport, just imagine what they could do if there wasn’t an overriding culture of greed and capitalism in big business.”

Not all High Street brands are playing their part in tackling pollution in their supply chain, is there anything we should be cautious of or looking out for when we’re buying clothes?

I think people are becoming more and more aware of the impact that consumerism is having on the natural world.

That being said, this kind of change is gradual and not everyone is going to wake up tomorrow and become conscious that the products they’re purchasing are having a negative impact on the environment. But I think we are starting to walk on the right track – and I think businesses that don’t change and adapt to this will simply cease to exist in the long term.

I also don’t think that change should be so reliant on the choices of the individual – it has to be governments and big corporations that we demand change from.

We have the power to do that. After all, if I can start a sustainable clothing brand from my one-bedroom flat in Newport, just imagine what they could do if there wasn’t an overriding culture of greed and capitalism in big business.

With an online store you can sell to customers all over the world, does being based on the Island still have its barriers, or are these able to be overcome?

For better or worse, the world is more connected than it has been at any point in human history. So, in terms of getting a product from point A to point B, there are no real logistical hurdles to overcome.

Asides from that, I feel lucky to have been born on the Island, and to still live here. There’s no other place quite like it – that’s not to say there aren’t better or worse places to grow up, but there’s something very special about this place.

You’ve just put out a fun T-shirt in collaboration with us featuring Health Secretary Matt Hancock’s now infamous slogan, how has that been received? Do you think this is a good place to trial the app?

To be honest with you, I don’t have an answer for the app question. I don’t know the science, data or politics behind using the Isle of Wight as the testing hotspot for the app, so my view wouldn’t really be based in anything.

What I’ve loved most about this whole thing has been the chance to collaborate with yourselves and to raise some funds for Brave Island – it’s going to be an awesome and super valuable project.

Art is one of humanity’s greatest healers. Once we get out the other side of this, it will be as important as ever to support young people – not only to give them a platform to express themselves, but also help build a future where following your passions can still be a reality.

What are your plans for the future with Dead Natives? Where can we find out more?

A brand like Dead Natives is constantly evolving, and it has to be quick to react to what is happening topically. I try not to think too far beyond ideas for the next collection, honestly.

I also have to balance running Dead Natives with my day job which takes a lot of creative energy. The benefit of that is that I am always learning and pushing myself to improve my craft.

There is still so much to learn about running my own brand – that that is super exciting, so I’m just enjoying going along for the ride.

To date the Dead Natives x Ventnor Exchange IW T-Shirt has raised over £1,000 to support our work with young people. If you’d like to support us and wear one yourself  you can buy them online here