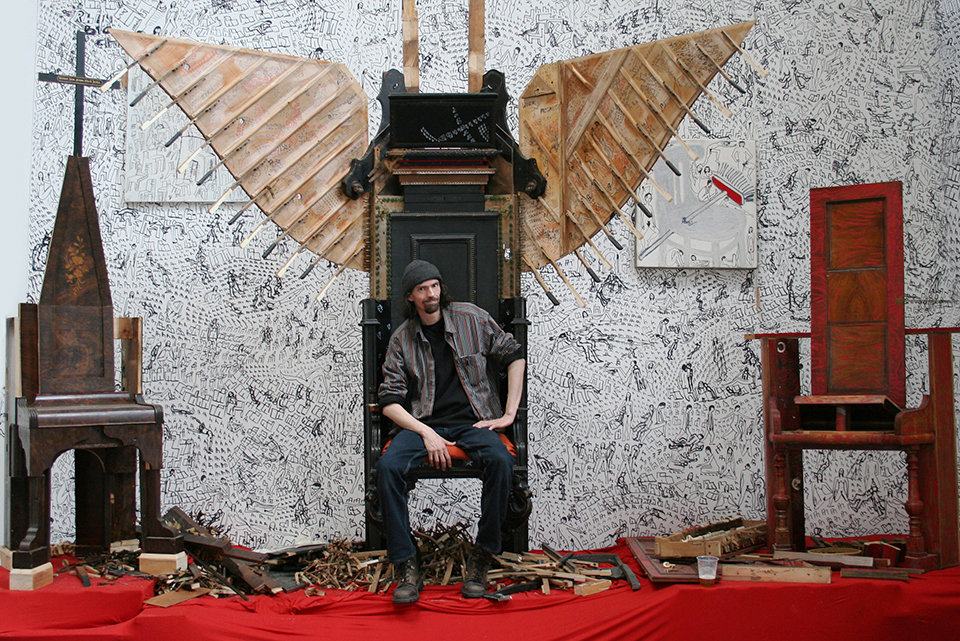 This Friday (15th Sept) will see the opening of a new exhibition by Paul Woods at the Ventnor Exchange. Ahead of its opening we had a little chat about changing creative environments and what we can expect at the show.

Hi Paul, you’ve just got back from Berlin, where you’ve previously lived for a long time. What do you think makes the German capital such an appealing place for creatives?
When I arrived in the early 90’s the east part was practically a ghost town. Many flats and shops had been abandoned in a rush to the west. But a trickle of people, including many artists and performers from Germany and across the world, moved against the flow into the vacuum. Rents were incredibly cheap, or free if you count the many squats, and there was an atmosphere of exploration. Something tangibly special was in the air. In the biggest squat, Tacheles (later to become a symbol of the struggle against inevitable commercialisation), tanks and a Mig jet lay scattered around the gardens; I remember crouching in a tank with a beer and a smoke during a muddy Winter party to get out of the freezing rain.

It was a ramshackle, bitterly cold Utopia; all the more idillic in the long hot Summers. We felt free as kids – I often say I “grew up” in Berlin. I at least escaped the London rat race to become an artist. Of course things gradually changed as enormous sums of money were pumped in from Bonn and elsewhere and much of the city became a living building site. By now it’s crammed full of new people and shiny new buildings. Opinion is divided, with many moaning that the Berlin spirit has been murdered by standardisation and greed. I disagree. Many friends are still there, older and wiser with kids of their own, still enjoying creative, relatively easy-going existences in a city of history and promise which, as far as I can tell, refuses to die – again and again.
What can the Isle of Wight learn from somewhere like Berlin?
Berlin itself is an island within Germany, or at least that’s how it once felt. And that felt good. Be inspired by what is on your doorstep, and consider any feeling of isolation as an advantage and a challenge. If someone complains, often with good reason, that there’s “not much going on”, he / she should be shown the flip side to that. See it as a blank, in fact beautiful and receptive, piece of paper, and follow your creative whims. Run around naked and fill the void! Paul Wood’s last exhibition at the Quay Arts Centre featured vast thrones built from found materials.
Your new exhibition is called ‘Fake Art’ – why is that?
The new works, or rather those of alter-ego Alfonzo Attentat, are the most banal I’ve made (so blame him for that). They can’t even be classed as “absurd” or “minimal”. They are framed trash, basically, and many will question whether they are “Art” at all.
What can we expect to see?
Things of little or no value. Vegetable peelings, string, rabbit poo, lots of used tea-bags… The work of alter-ego Alfonzo Attentat explores when and if banal objects can become art.
Why do you think conceptual art is important? As opposed to other visual disciplines.
In a nutshell, the creative process which takes place within the brain is as important, if not more so, than any artwork which comes out of it. One could say that the idea itself is the artwork. If I could frame an idea and hang it on a wall, or mount it on a marble plinth, then that’s all I would do from now on. With Alfonzo I think I’ve come a little closer to that illusive goal.
FAKE ART takes place at the Ventnor Exchange for 3 weeks from 15th September – 6th October available to view during our normal opening hours. Free entry.