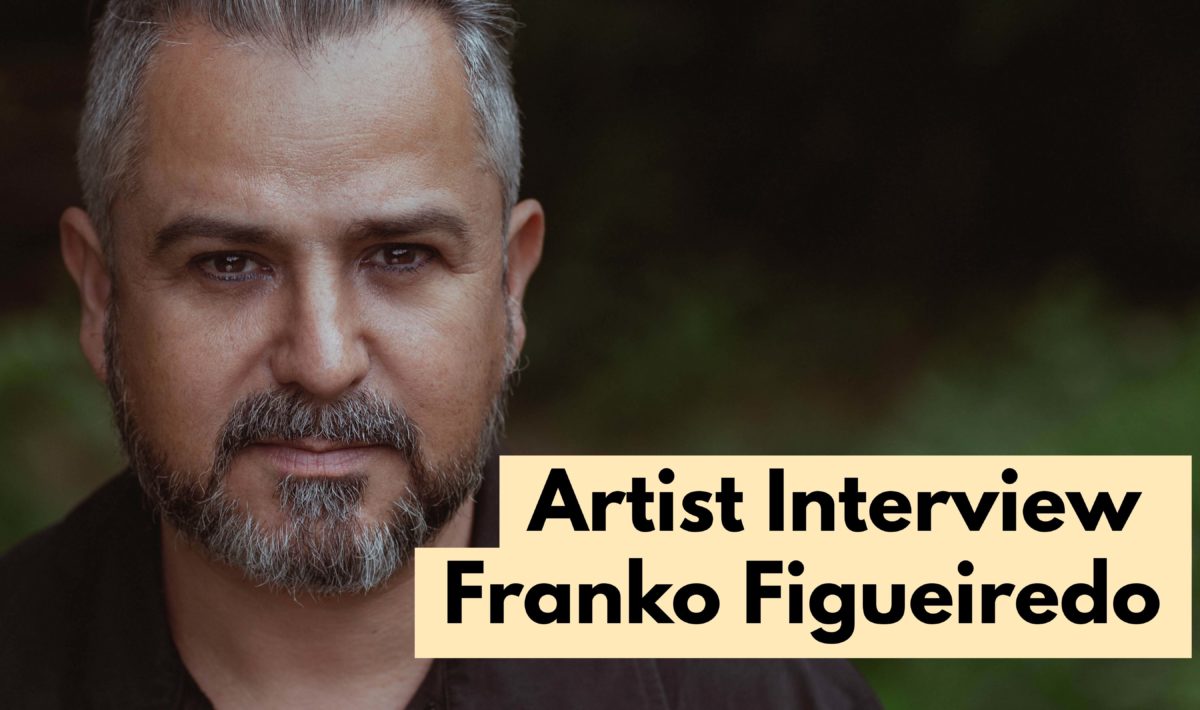 Franko Figueiredo is a theatre maker and director who has produced work all over the world, but calls the Isle of Wight home. We find out more…

Hi Franko, how are you? How have you been finding life under lockdown?

Hey! I’m good, some days better than others; like most folks, getting used to the ‘new normal’. It’s been challenging. Life under lockdown has been busier than ever, my time is being spent on re-working schedules and plans and adapting our projects to this virtual world, etc, etc. It’s been a bit of a rollercoaster, if I can be honest, it’s hard not to feel emotional about it all, we are living through a global collective trauma. It is easy to get bored, to get angry, you have to sit in with little voices in your head, it’s not so easy to share those thoughts and it can take a toll on your mental health. I particularly miss the human connection, the eye contact, in person communication, the energy exchange that comes from people being in the same room. We are living through many paradoxes.

Mostly, I am very grateful, I’m quite aware of the privilege of being in lockdown here on the island.

“I believe we are in the cusp of an important cultural movement here. “

Can you tell us about what you do with StoneCrabs Theatre? What does your role entail? Where did the name for the company come from?

I am the Artistic Director and work closely with our Executive Director Fabio Santos. My role involves developing, planning, managing and delivery artistic projects ranging from stage productions to training programmes and community projects.

The name for the company came from our very first project. Back in 2000, a group of like minded artists, Tereza Araujo, John Heyd and myself, got together to develop an immersive piece of Theatre in South East London.  A piece later called “StoneCrabs, a Domestic Story of Vitriol, Violence and Victory”; it dealt with domestic violence and it received local arts funding. Audiences would go to a real house to experience the story, rather than a theatre; we were using a mix of techniques based on Boal’s Theatre of the Oppressed. Word of mouth got around, the BBC did a feature on us, and very soon people started to refer to us as ‘StoneCrabs’.  The name stuck.

We toured performances to various unusual spaces in the UK, from houses, to churches to community halls. Two years later, by the end of that tour, we realised we were a company and decided to make it all formal by registering as a company and later as charity.

You’ve worked all over the world from London to Tokyo, what made you decide to settle on the Isle of Wight and how does it compare to other parts of the world?

Yes, actually, I was meant to be in Tokyo as I write this, hey ho! the project has now been postponed to 2021.  I love the Island. I think it is a privilege to be living in such an amazing scenic place.  I came to settle here because of my husband, I met Alan here 12 years ago. As our relationship became more serious he moved in with me in London. When his mother passed away, moving to the Island seemed like the right thing to do and It was.

I still work away somewhat, in London and overseas. The Island has its unique charm, which is incomparable to nowhere else, it has been and it can be the birthplace of many great achievements. And although I have spent most of my teen and adult life living in a megacity, I have rural roots, I spent my early childhood years in a little village in Brazil.

I am a big believer in grass-roots theatre, so it was not hard to adapt, I am still learning a lot about the island, and after 4 ½ years it feels like home already.  I believe we are in the cusp of an important cultural movement here. All the artists and friends I have brought over to work/visit the Island so far,  from other areas of the UK and places like Spain, Italy, Japan, Brazil, they all love it here, how could they not?

You helped launch a very successful Young Directors programme, this seems like an amazing opportunity for young people. Can you tell us a bit about how this works?

That is a project that is very dear to me. Back in 2004 & 2005, I had received many requests from young people asking to observe/assist my rehearsals. At one point, I think, I had about 19 letters and some 12 emails.  They were mostly from young people who enjoyed theatre and wanted a career path but didn’t necessarily want to be an actor.

Most youth groups only provided acting opportunities; there were no real clear pathways into Directing and other backstage opportunities, except for some expensive post grad courses. I decided to invite these young people for a meeting to understand their needs, and many felt that the Theatre they saw didn’t represent them: it was too traditional and didn’t speak to them, and that struck a chord with me. So I set up this free training programme, and it’s been running ever since.

Every Autumn, we take on between 9 and 16 young people with whom we share our skills in theatre making through a practical approach, based on the Makiguchi and Paulo Freire’s pedagogy methods. Once admitted, participants meet weekly to develop the craft of stage directing, devising, but also producing their own work, creating and managing budgets, fundraising, producing theatre, marketing, etc, etc.

As they progress, they also work as a cooperative to curate and produce their own theatre festival under our supervision, and the supervision of guest mentors, thus putting immediately into practice the skills, tools they are learning. It is an extremely collaborative model of training, which embraces creativity, communication, collaboration and critical thinking. This year’s cohorts were meant to present their Festival, Playdoh, last April, needless to say it has been postponed.

Theatre, storytelling is one of the oldest art forms, it might shape into something else for sure, but it will never lose its essence.  We are all looking into digital technology to see how can that be transferred, the Arts Council England is encouraging this heavily. Artistry and accessibility are concerns of mine though, but I’m sure we will find a new way of making it all more accessible and navigate new ways of merging the theatrical form with digital media.

We will need to re-think our values. I think our sector will only be okay if we get together, join forces, and collaborate. We need solidarity. What this pandemic highlighted to me so far, is how unaware folks are of their own privilege and the huge need to change the current education system. Theatre and arts will play a big role in the future,

You’re also one of the driving forces behind  ‘Out on an Island’, for our readers who haven’t heard about this, can you explain a bit more about what it’s about? How can people get involved?

Yes, that’s correct. ‘Out on An Island’  focuses on the untold heritage of the Isle of Wight LGBTQ+ community and it’s funded by the National Lottery Heritage Fund. The project is uncovering 100 years of queer history on the island, recording Oral Histories of the local LGBTQ+ community, reflecting on their social involvement, contributions, personal struggles and triumphs, breaking stereotypes and giving a new perspective to historical context.

The history of queer people is a history of invisibility, and this project is a small step in making ourselves visible. Although we have reached much in terms of equality, we still carry the legacy of years of criminalisation, Section 28 for instance, which still influences our attitudes now. We are doing this by hosting specialist talks, such as the Peter Tachell talk last February at Quay Arts and have delivered community workshops and learning sessions in various venues across the Island.

We are also publishing a book at the end of the year, and are particularly interested in stories by LGBTQ+ folks with an island connection, these stories don’t need to be heroic achievements, it could be day to day ordinary accounts that mark LGBTQ+ life (hidden or not) on the island.

For instance, we have an account of the first Pink Picnic happening in Ventnor in the early nineties; and we have an interview where an 86-year-old gay man remembers the moment when he heard the word ‘homosexual’ back in 1954 in Newport bus station. He describes feeling elated as he understood himself, but the elation soon vanished because the context in which the word was being used in the papers was about Lord Montagu’s conviction and imprisonment for homosexual sex. And that shot him down. He already was a criminal.

We are looking for Memorabilia, objects, photos, invites to events, theatre tickets. Again, many of these would have been carefully concealed, kept under wraps and perhaps it helps to think of not their monetary value or how ancient they are, but the story certain objects carry.  It could be that tin pencil box that you were holding when you first came out or the flag created for the Gay Sailing Association. Those will form part of a month-long exhibition we are planning for the autumn at Quay Arts.

For more details on how to submit a story, fictional or not, a poem, memorabilia just click here. Anyone interested in getting involved can contact us on hello@outonanisland.co.uk  or on insta, twitter or FB: @outonanislandiw

And finally, what’s been your favourite production you’ve been involved with and why?

So hard to pick one!  It would have to be The Asphalt Kiss in Tokyo, a Brazilian queer play written by Rodrigues in the 1950s, which I translated and directed for the London stage in 2012. We were subsequently invited to re-create it in Tokyo with a Japanese cast in 2018. The whole process was life affirming.

You can contribute to Out On An Island by clicking here