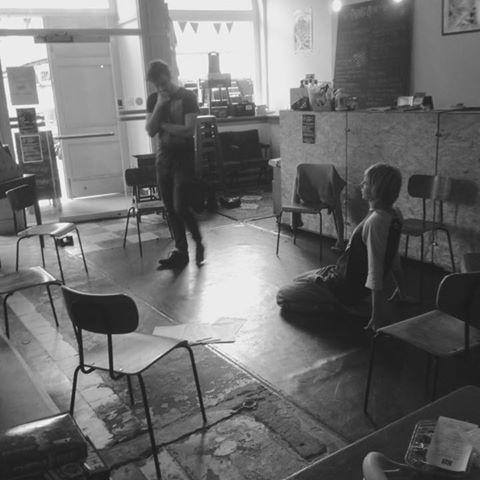 Three weeks I spent developing a piece of theatre in collaboration with Jack Whitewood and Mhairi Macaulay. By the end of the second week I’m proud to say I had almost learnt to correctly spell Mhairi’s name. It’s Scottish and it sounds like ‘Sari’ but with a V instead of an S at the beginning. So that was obviously a highlight but there were other perks to working with these two quick-witted and kindly beings, who by the way have an uncanny knack for convincingly occupying simultaneously the roles of mother and son and sister and brother and wife and husband all at once whenever they’re together. Whatever Jack’s strengths may be – and truthfully he has an almost unsettling large stockpile of them crammed into that dextrous mind of his – they’d be close to worthless if Mhairi didn’t force him to get out of bed each morning. He’d never leave the house before nightfall.

I had come to the Island fresh back from a week on the coast in Cornwall. Never before had I spent a whole month by the sea and I think that definitely shaped the material I ended up writing. It was a blessing having the cold water so close at hand, always capable of shocking me back to life whenever rhymes and ideas ran dry.

The three of us commenced the process with scarcely a single concrete idea between us. Which looking back was all to the good. I had a vague notion of exploring the binary nature of reality as we know it. The tidal ebb and flow of life and death, dark and light, man and woman, love and loss. And what lies beyond this endless tug of war of being? Infinity? God? I didn’t have any answers and I still don’t, but these were the sorts of questions filling my head when I arrived in Ventnor.

To begin with we just played, conducted experiments, shared influences, went for coastal walks. The brief we gave ourselves was to create in three weeks a piece of theatre that didn’t need to be remotely polished but which should feel finished in the sense of having a beginning, middle and end. It would be performed to an audience before my return to the mainland and it was explicitly allowed to fail. We would decide afterwards whether we all thought the journey we’d begun was worth pursuing further. If so then great, if not then ah well. Nothing ventured nothing gained sort of thing.

I can’t remember precisely how, but some way into the first week we settled on Time as a theme. The past and the future seemed to me an apposite representation of that duality of worldly existence which I mentioned earlier. And the present moment, in this context, was to my mind akin to the thing behind the binary veil of this and that. The place where yin and yang and you and me and birth and death exist as one. Or something like that. And the more material that was being created, the more the piece seemed to be becoming about people experiencing time in different ways. I have lots of memories of being a child completely baffled by the concept of time passing. As you get older it’s easy leave behind those sorts of bewilderments. To be unquenchably mystified by the mere fact of ones own existence as an adult can seem like a bit of an indulgence.

Anyway, suffice to say I loved working with Jack and Mhairi. The Exchange was a great space to rehearse in during the days and to write in during the evenings. At times I felt obscenely rushed by the three week deadline. I had many doubts along the way about my own capacity to write and remember 35 minutes worth of words before the final sharing. And when it came to putting the piece on its feet, Jack really put me through my paces. I’m no actor and I often felt quite uncomfortable improvising conversations with imaginary audience members, or falteringly delivering verses still in need of drastic editing to an empty circle of chairs whilst trying to take on board and execute his directions.

But when finally it came to the performance, those twenty days of highs and lows and dilemmas and panics and solutions all kind of fell into step with each other. Having an audience in the room came as an unexpected relief; by virtue of their eyes and ears my internal monologue became a conversation, and the script was transposed from a theoretical document into something living. It breathed as I breathed as the audience breathed. All of us shaping forever together in the incessant timeless unfathomable present.

There’s talk of the piece being carried further forward in the new year. I’m itching to dust it off and start touching it up and fleshing it out but for the moment I’m flat out with other projects in London and life at the Exchange is no doubt hurtling along as busily as ever. We’ll see what happens in 2017, in any event I’m eternally grateful to have been invited on this Island adventure, and show or no show I expect I’ll find some excuse to return to Ventnor sooner rather than later.

Records of the Month: May 21